Use these terms while you study your plants, collect data and make observations.

Awn/bristle:  A slender, hair-like structure found on the spikelets of many grasses.

Blade:  The upper portion of the leaf, which is divided from the sheath by the collar and the ligule.

Collar:  The area on the outer side of the leaf where the blade and the sheath join.

Culm:  The stem of a grass.

Glume:  One of a pair of dry membranous bracts at the base of the spikelet of grasses.

Inflorescence:  The part of a plant that consists of a cluster flower bearing stalks.

Internode:  The part of a plant stem between two nodes.

Lemma:  The outer bract that encloses the flower in a grass spikelet.

Ligule:  The structure that clasps the stem at the junction of blade and sheath.

Node:  The point on a plant stem from which the leaves or lateral branches grow.

Palea:  The inner bract that encloses the flower in a grass spikelet.

Panicle:  A branched cluster of flowers in which the branches are racemes.

Plant Architecture: Structures of the plant, leaves, stems, roots, and the patterns they take.

Raceme:  A type of inflorescence that is unbranched and bears flowers having short stalks along the axis.

Sheath:  The tubular portion of the leaf, which wraps around or encloses the stem.

Spike:  An inflorescence consisting of a raceme of flowers growing directly from the stem.

Spikelet:  A flowering structure common to grasses, where a reduced flower is encased in several protective structures.

Tiller:  A shoot that arises from the base of the stem in grasses.

Adaptive Value: The ability of a new trait to add to an individual or species’ chances of survival.

Gene Frequency: How often a gene appears within a population.

Genetic Engineering:  Technology where DNA from one organism is placed into a different organism.

Genotype: The two specific alleles an individual has for a trait.

Model Organism: An organism chosen by scientists for study, usually based on characteristics such as short generation time, high reproductive rates, easily observed characteristics, and close relative relationship to other organisms.

Mutagenic Agent: Any substance that can change DNA, including UV radiation, asbestos, and certain chemicals.

Mutation: A change in DNA base pairs

Phenotype:  The observable characteristics of an organism, as determined by its genetic makeup.

Selective Breeding: The process where humans control the reproduction of a species to favor certain desirable traits.

Serrated:  Having notched or jagged edges.

Silent Mutation:  A change in DNA that does not produce a change in the phenotype.

Variegated:  Plants with a variety of colors on the same leaf.

Variation: The amount of diversity within a species or population.

Virescent: Not fully green as compared to the wild type. 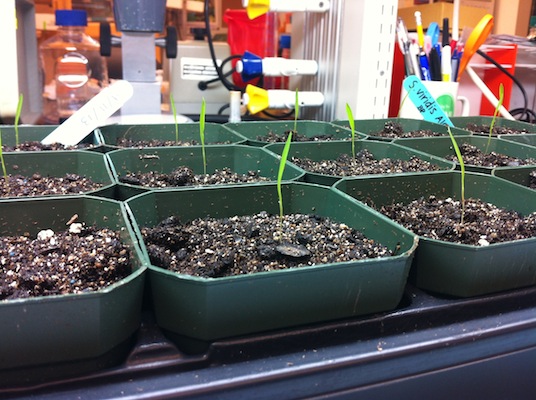 Click here to see profiles of the participating scientists.

Thank you to our supporters!